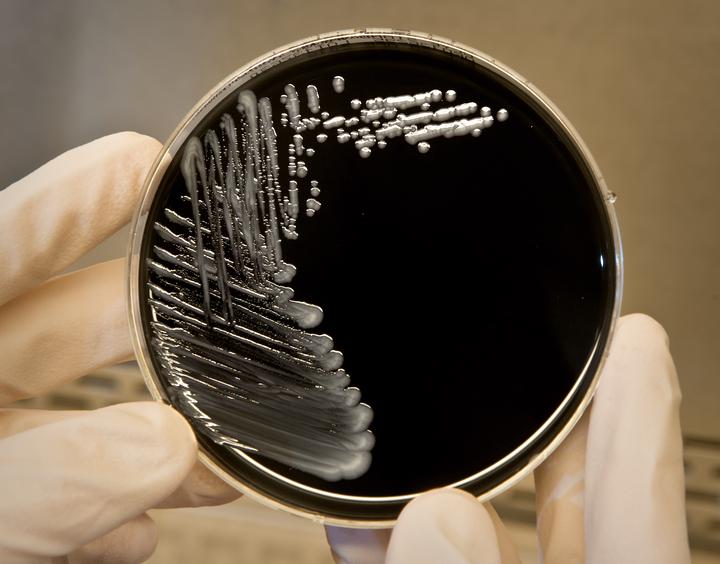 Image of Legionella on a plate. Source.

It’s been three years and 11 months since the residents of Flint, Michigan have had clean drinking water.

When the city water source was switched from Lake Huron to the Flint River in April 2014, residents fell victim to corrosive, lead-contaminated water. Exposure to and consumption of that water through October 2015—when the water source was switched back—has led to learning and developmental delays and correlates with decreased fertility. The water switch is now linked to deaths caused by the bacterial pathogen Legionella pneumophila.

Legionella are gram-negative bacteria found throughout nature, where they infect amoebae. However, they can also live in built environments, such as reservoirs and water towers, where they form persistent biofilms from which bacteria are dispersed. When the water is used, people are exposed to the bacteria by inhaling aerosolized water droplets like those produced by showers and sprinkler systems.

Once in the lungs, legionellae can cause the infection known as Legionnaires’ disease. The bacteria invade and replicate in lung macrophages, which provide a replication environment similar to that in their amoebae hosts. Unchecked, the infection leads to pneumonia and a 10-30% chance of death, primarily in those with compromised immune systems, including those over 50 and current or former smokers.

Although at least 24 species of Legionella are associated with human disease, about 90% of Legionnaires' cases are caused by Legionella pneumophila. This is the organism that University of Michigan professor and ASM President Elect Michele Swanson researches. Her work has focused on how legionellae replicate inside macrophages, evade degradation, and, more recently, persist in the environment.

Both Swanson’s expertise in legionellae and proximity to Flint meant she was ready and able to join a multidisciplinary team created to study the effects of changes in the Flint water source on public health. This research group, the Flint Area Community Health and Environment Partnership (FACHEP), also includes researchers from the Henry Ford Health System, Michigan State University, Colorado State University, the MADE Institute, Genesee Health Systems, and Kettering University. FACHEP was created in January 2016, when Michigan Governor Rick Snyder organized a $3.35-million contract with the Michigan Department of Health and Human Services (MDHHS) and Wayne State University to fund the collaboration.

Before the Flint water crisis, there were 6 to 12 Legionnaires’ disease cases in a typical year in the Flint area. When Flint’s source water was switched to the Flint River, there were 45 cases per year in 2014 and 2015. Nick Lyons, the former director of MDHHS, has been charged with involuntary manslaughter for failing to respond to the Flint Legionnaires’ outbreak for more than a year, while the Chief Medical Executive, Dr. Eden Wells, has been charged with obstruction of justice. Wells has also been accused of interfering with research conducted by the FACHEP group. If the MDHHS can show that the outbreak was limited to patients and visitors to the McLaren hospital in Flint (which has been plagued by hospital-associated Legionnaires’ disease), then a guilty verdict might be avoided. However, FACHEP’s recently published research doesn’t support the hypothesis of the MDHHS, who despite providing funding for the FACHEP, disputes the findings from both papers. That funding will no longer be available following a contract dispute and was announced the day following publication of Zahran et. al in PNAS.

Zahran et. al, compared cases of Legionnaires’ disease in Flint and surrounding areas over a six-year period (before, during, and after the Flint water switch) to chlorine levels at multiple locations in the city, and found compelling correlations. Before the water source was switched to the Flint River, chlorine levels at all eight locations clustered together with levels ranging between 0.2 and 1 mg/L. However, after the switch to Flint River water, the chlorine levels went haywire and fluctuated wildly between locations, ranging from almost 0 to 2.5 mg/liter (Figure 1). Levels restabilized after the water source was switched back to Lake Huron.

When the researchers plotted the probability of Legionnaires’ disease against Cl$_2$ levels they found that the chlorine concentration was predictive of disease occurrence. For chlorine to act as an effective disinfectant, it must be present as Cl$_2$ in levels of at least 0.2 mg/liter and the Centers for Disease Control and Prevention (CDC) recommends 0.5 mg/liter. The odds of a person in Flint contracting Legionnaires’ disease increased by nearly threefold when the average weekly chlorine levels were below 0.5 mg/liter and by fourfold for weeks when chlorine was less than 0.2 mg/liter.

The researchers hypothesize that the organic matter in the Flint River, plus leached metals from pipe corrosion, likely bound the chlorine and caused the levels to dip dangerously low. The ineffectively low chlorine levels combined with warm summer temperatures, allowed legionellae to thrive, spiking known cases of Legionnaires’ disease in the third quarters of 2014 and 2015. While their data indicate that chlorine concentrations in the water were predictive of Legionnaires’ disease among Flint residents, the data do not rule out other factors contributing to bacterial growth, like the greater abundance of nutrients (iron and organic matter) in the water.

Initially, the researchers determined that switching the water source to the Flint River made a Flint resident 6.3 times more likely to contract Legionnaires’ disease than someone not exposed to the water. However, in September 2014, a boil water advisory was issued that caused residents to avoid Flint River city water, creating an interesting dynamic to examine. The researchers performed the same analysis, this time dividing Legionnaires’ cases into before and after the advisory. In this analysis, the odds ratio was 10 post-switch and pre-boil water advisory while the odds ratio was “only” 5.8 following the advisory. The odds of Legionnaires’ disease for Flint residents returned to normal (<1) when the water source was restored to Lake Huron. The researchers estimate that the city’s switch to the Flint River water was responsible for 80% of the reported cases of Legionnaires’ disease during that time.

Following publication, the MDHHS issued a press release stating that use of the referral date (when the case was reported) instead of the symptom onset date introduces error. However, researchers maintain that this doesn’t affect the overall results. Swanson’s study is in agreement with a similar conclusion reached in a 2016 study. In Flint between 2014 and 2015, 12 people died of Legionnaires and more than 80 fell ill. Those are only the known cases.

These findings are significant because they indicate that the clinical isolates are not related and likely have different initial sources, which means that the patients weren’t exposed to the same strain of legionellae in the same location and suggests that the outbreak was not hospital-associated. The data also support what is already commonly accepted in the legionellae field—that cases of Legionnaires’ are drastically underreported, and that SG 1 strains cause those that are reported.

The MDHHS issued a press release disputing the possibility of under diagnosis and reporting of Legionnaires’ disease caused by plumbing isolates.

In the U.S., it’s estimated that as few as 5% of Legionnaires’ disease cases are documented. Clinically, there’s little need for detailed diagnosis, since most patients presenting with pneumonia are immediately prescribed antibiotics. Patients are only tested for a specific bacterial cause if they don’t respond to therapeutics. Drug resistance in Legionnaires’ disease is not yet an issue, but surveillance of the disease is severely hampered since failing to diagnose also fails to generate data that could be important for setting policy.

However, detection presents a problem. Patient sputum samples are notoriously difficult to obtain, and legionellae are particularly finicky to culture, requiring special growth medium, an experienced lab technician, and several days for growth. Even when present in the sputum sample they may not grow, particularly if the patient is already receiving antibiotics for the pneumonia. According to the CDC, culturing from sputum can positively identify 20-80% of cases.

The test of choice for Legionnaires’ disease detects L. pneumophila antigen from the urine in more than 70% of cases. The urinary antigen test is rapid and isn’t immediately affected by administration of antibiotics, but it has its own severe limitations: it only reacts to SG 1 antigen, and some patients may be so ill that they cannot produce urine for the test. There are other detection methods, but they suffer from cross-reactivity with other pathogens or aren’t available as a standardized assay. So, while there are at least 15 different serogroups of L. pneumophila, only 5% of cases are ever confirmed by culture and >75% of known cases are caused by a single serogroup, SG1. It’s difficult to determine whether cases go unreported because diagnostic testing wasn’t performed or because a test (whether culture or antigen) failed.

The outcome of the criminal cases against former MDDHS employees could be the catalyst for policies to protect public utilities consumers from water-borne pathogens such as Legionella. As it stands, water suppliers (e.g., municipal water systems) must monitor several water parameters, such as chlorine, on a weekly basis, but chlorine has a half-life of less than five hours, or even less in higher temperatures. This means that locations further away from municipal treatment plants, and places where water is stored, especially at warm temperatures such as in water heaters, are at increased risk of legionellae growth. While municipal water systems are also required to monitor water for bacteria that might cause gastrointestinal illnesses (e.g., E. coli), there are no federal laws for water-borne respiratory pathogens such as legionellae. Legal liability for outbreaks of Legionnaires’ disease currently falls on the owners/operators of the facility at which the patient was exposed, as well as those responsible for installation and maintenance of the contaminated reservoir.

Policy changes would come none too soon. Reported cases of Legionnaires’ disease in the U.S. have increased by four and half times over the last 15 years and fewer than 5% of cases are outbreak related with the vast majority occurring sporadically. But proper surveillance of legionellae levels in the water supply, along with the already collected chlorine data, are needed for researchers to understand the prevalence of legionellae and the efficacy of chlorine as a disinfectant. While exposure to 0.4 mg/liter of chlorine for 15 minutes is sufficient to kill legionellae in the lab, Zahran et al. point out that it may not be effective against legionellae contained within amoebas or biofilms.

Dr. Swanson is carrying forward her research in Flint by working with a team of experts at the National Academies of Sciences, Engineering, and Medicine to write a public report on the management of legionellae in water systems. In addition to surveying the current literature regarding legionellae ecology, human exposure, and management strategies, this white paper will also review current policies and hopefully make helpful recommendations for policy makers.

*Republished from ASM.org with permission. 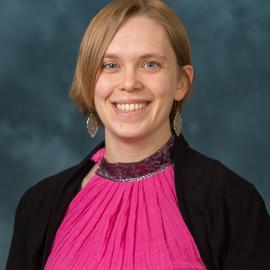